Developments bring very rapid changes in all things, including one in the industrial sector. Inevitably the current industrial revolution 4.0 is often echoed by many people, although not all of them understand what it means. While a few doubt the changes in the industry to the progress of Indonesia.

The term industry 4.0 was first echoed at the Hannover Fair in April 2011, which was then used by the German government in advancing the industrial sector to a higher level using technology assistance. It can be interpreted as the interference of an intelligent system and automation in the industry.

Definition of the Industrial Revolution

What is the industrial revolution 4.0? From the data of an industry or business driven using machine learning or AI, computer intervention has actually been included in industry 3.0. However, at that time computers were seen as something that could create new market opportunities, once it was accepted that machine learning and AI were at that stage. 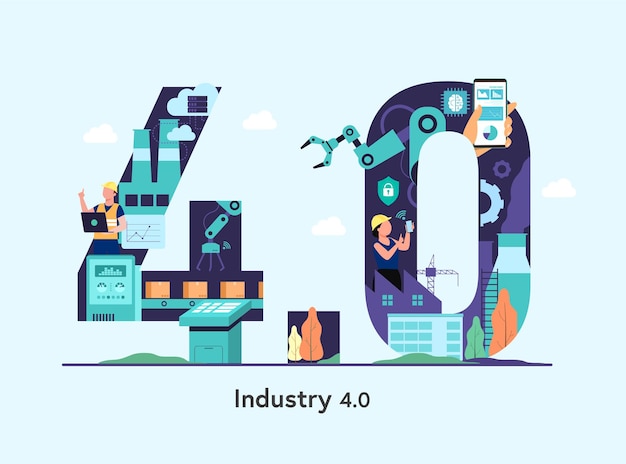 The first principle in the fourth generation industrial revolution is interconnection, or the relationship between humans, tools and machines in communicating with each other. With the Internet of Things (IOT) and Internet of People (IOP).

The technology used certainly allows and makes it easier for someone to collect various types of important data in the production process, the most important thing is making decisions.

Technical assistance becomes the third principle, with relevant and important information to make an informed decision and solve problems quickly. The presence of a cyber physical system will assist humans in completing heavy and dangerous work.

Included in the 4.0 industrial revolution in education, the cyber physical system will be able to decide for itself automatically in carrying out tasks according to the correct function without requiring intervention from external parties or other parties.

It is a system that uses various computing devices, mechanical and digital machines that are integrated and connected. The IoT system has four components, consisting of sensor devices, connectivity, data processing to the user interface.

Is a term used to describe a large volume of data, both structured and unstructured data. Big data is used in many companies or businesses and helps a company determine the direction of their business.

Is a technology which combines the virtual world of dimensions with three-dimensional objects that exist in a real environment, then projects the virtual objects into real time.

Is a technology that was formed to protect all information owned from cyber attacks. Cyber ​​attacks are all kinds of actions that are deliberately carried out to disrupt the confidentiality or the availability of information.

Impact of the Industrial Revolution 4.0

It is a transformation of the retail industry that was touched by the influence of technology, then turned into what it is today. Initially it was only a platform used for buying and selling transactions between users and had nothing to do with big businessmen.

Starting from property aggregators, transportation, health services to mutual funds, now everything can be accessed easily using only a mobile phone that is connected to the internet. Service aggregators also provide another advantage, namely data transparency.

Assigned to execute various digital marketing strategies belonging to the company based on the goals and objectives to be achieved. The development of the industrial revolution 4.0 era has made more and more digital marketing agencies appear.

Thus a brief explanation of the industrial revolution 4.0 starting from the understanding, principles, impacts to real examples. Interested in following technological developments both domestically and worldwide?