Understanding the Economic Recession – Its Causes and Impacts

Home > Articles > Understanding the Economic Recession – Its Causes and Impacts

When a country’s economic growth declines with signs of a lot of weakness in gross domestic product sales (GDP) for two consecutive quarters, this condition is called a recession. Recession is a condition in which the unemployment rate, the decline in retail product sales, and the contradictions of manufacturing income alternately arise.

A recession is also referred to as a slowdown in the magnitude of economic activity with a sign of a significant decline in activities included in the economy within a few months. Usually, what happens in a country, the conditions included in this recession appear for three months and can be more than this in general.

What is a recession? A recession is a decline in economic activity that occurs significantly over a long time and is stagnant. This condition usually starts from months to years, considering that recessions are closely related to massive shocks in economic activity, this is also following the opinion of experts.

They assert that an economic recession is a condition that arises when a country experiences an increase in the rate of unemployment, a decline in retail products to a harmful gross domestic product, and shocks in income and manufacturing over a long period, despite economic growth but the value is negative for two consecutive quarters.

Causes of the Economic Recession 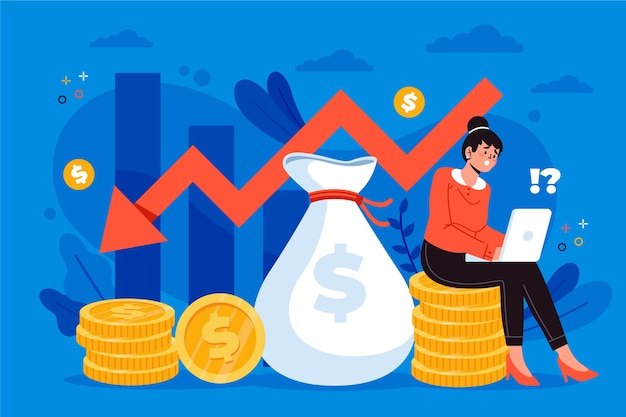 A condition in which the price value of a product continuously increases, even though inflation is not a bad thing. However, if this condition goes on excessively, it will be included in the dangerous category and can have an impact on the meaning of a recession.

Deflation can have an even worse effect, a condition that causes prices to decline over time, thereby reducing wages for workers and thus putting pressure on prices. Even so, the impact of deflation is mostly affected entrepreneurs, if they stop spending money, the effect will be economic damage.

The emergence of panicked investors in large numbers, this condition is marked by the crowds of them selling shares to then trigger a recession. This can be called irrational excitement, the existence of a bubble in the stock and real estate markets. Until finally the bubble burst and panic appeared to destroy the market.

This condition triggers serious economic problems to create a recession, ranging from debt piling up on individuals and companies. Debt that automatically makes repayment funds soar, this repayment fee will gradually increase and even make individuals or companies fail to make payments.

Developing technology not only brings great benefits, but also a negative impact in the form of a recession. As was the case in the 19th century, a wave of technological improvements led many companies to save on labor. The industrial revolution then made all professions seem to become ancient thus triggering a recession.

Indicators of a Country In Recession

In 2008-2009, the economic crisis hit Europe and made as many as 17 countries in the continent experience a period of recession. Including France, Spain, Ireland, Portugal, Greece to Italy, after that it was the turn of one of the ASEAN countries, Thailand, which experienced a recession after a decline in economic activity for two consecutive quarters and a gross domestic product increasingly free fall.

Imbalance of Production and Consumption

Consumption and production are two things that are closely related in the world of economic growth, but when they are imbalanced it will cause problems in the economic cycle. The high production is not accompanied by consumption, thus creating a buildup in the stock of goods that have been produced.

Import Value is Greater Than Export

Countries that are unable to produce one of their basic needs are forced to import goods from other countries. Meanwhile, countries with excess products will export to countries in need. However, if the value of imports is greater than exports, the country will certainly experience a recession.

The soaring commodity prices that are no longer affordable for all people, especially those with lower middle-class economic conditions certainly make the economic condition of a country worse. Because it is not followed by purchasing power by the people, instead of spending it to make ends meet, they can’t afford it.

If there are many people without jobs in an area, a country, or the world, certain things are not going well. Stable economic activity certainly requires a lot of manpower to be absorbed, but if the region or country is unable to provide employment, a recession may be occurring.

Impact of the Economic Recession

Impact of the Recession on the Government

The increasing number of unemployed is the most visible impact, a condition that makes the government demand to immediately find solutions to end the recession. One of them is the opening of job opportunities to absorb labor, but on the other hand government loans will also increase due to the development of businesses.

Impact of the Recession on Companies

The most dangerous impact of a recession on companies is bankruptcy. It is triggered by various factors. This condition causes the country to experience a decline in income, after which it triggers a domino effect on the economic life and activities of its workers. Layoffs are the most common thing in these conditions.

Impact of Recession on Workers

Termination of employment (PHK) becomes a frightening specter for workers if a recession is experienced by the country. This condition triggers unemployment, and if layoffs are carried out on a large scale, it could be the main factor that triggers a country to experience a recession. It’s even worse that unemployment threatens the social order and life of the nation.

Massive spending must be done by the government, this is the first step in anticipating a recession. Later during the recession domestic demand will increase and massive government spending will make business activities run, this will make economic shocks due to the domino effect can be very well prevented.

This sector has been the most affected, as was the case when the Covid-19 pandemic hit the world. Various programs to assist and keep MSMEs alive must be carried out by the government, solely so that economic activities in this sector do not stop or even die due to eroded conditions.

The distribution of funds in the banking sector is then redistributed with a larger scale of funds to the public. One of them can be in the form of loans, through labor-intensive corporations in the context of national economic recovery. This facility is intended for corporate businesses in the labor-intensive export sector with a minimum number of 300 employees.

Sampoerna University’s Faculty of Business applies an international standard curriculum. We create graduates that are highly sought-after by industry employers. 94% of our graduates get full-time jobs 3 months after graduation. Together with our students, we build individuals with extraordinary skills to compete not only in Indonesia but also in the world.